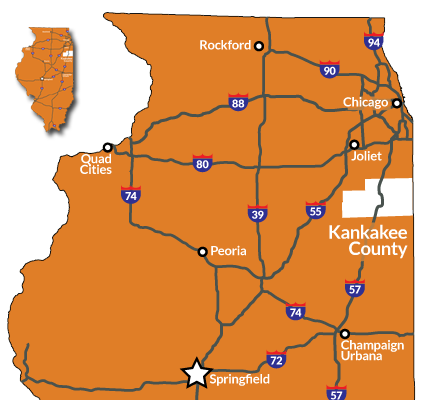 We welcome you to explore our unique blend of natural beauty, heritage and urban attractions along 57 miles of winding river. Kankakee County is located just 50 miles south of Chicago, off of Interstate 57. Routes 45/52, 50 and 17 also run through the River Valley. O'Hare International Airport is 75 miles north of Kankakee County, and Midway Airport is 50 miles north. The Greater Kankakee airport is also available for personal aircraft landing space.

In 1832 the Pottawatomi Indians ceded their land to the United States Government in the Treaty of Camp Tippecanoe. The Pottawatomi left the Kankakee Valley and moved to a reservation near Council Bluffs, Iowa. As word spread about the government acquiring the land, immigrants from New York and Vermont moved west to Kankakee County, locating mostly in Momence.

The first train arrived in Kankakee on July 4, 1853. At the time the only structure in Kankakee was a 20 year old cabin. Momence and Bourbonnais were the most developed and populated communities due to French Canadian immigration. The Illinois Central Railroad ordered that a town grow along the bend of the River, this would become the city of Kankakee. The railroad brought business, lumber, transportation, trade, and a means for farmers to sell and ship larger crops.

By the 1880's, Kankakee County was home to several schools, businesses, and elegant new developments; the Arcade Building which housed the opera house, fine hotels like the Hotel Riverview and The European, and a State Hospital for mental health (present day Shapiro). With these new developments, tourism began to boom in Kankakee County. Visitors and residents flocked to the Kankakee River to enjoy Gougar's Grove amusement park, Captain William Gougar's Steam Boat, rowing, bicycling, skating, sledding, parades, and live music. The Hotel Riverview offered a dance pavilion, shoot-the-chutes ride (used as a toboggan slide in the winter months), bathhouse, clubhouse, and more. Harnit's Pony Farm also known as Wildwood Park was a resort for horseback riding, boating, croquet, and tennis.

Yet another Kankakee County attraction was the 1890 Hay Place in Momence. The 206'x166' castle-like structure was made of hay bales and featured agricultural displays, bandstand, and dance floor. The second and final Hay Place was reconstructed in 1891 to be even larger, 217'x224'.

Over the years, Kankakee County endured many hardships including fires, weather, and wars overseas. Many admired buildings including the Hotel Riverview were taken by fire before adequate fire departments were established.

Despite significant losses, Kankakee County continued to thrive due to the railroads and the Kankakee River. The river provided water, power, recreation, transportation, and fishing. It was also the perfect backdrop for beautiful homes. In 1900, B. Harley Bradley and his wife Anna Hickox Bradley decided to build along the river on South Harrison Avenue. Anna's brother, Warren R. Hickox was also planning a neighboring home. Both homes were designed by Frank Lloyd Wright who would become a world famous architect. The homes were completed in 1901.

In 1912, Ms. Julia Remington built the Remington Theatre (present day Majestic Theatre) for $80,000. The theatre burnt down 5 months after opening but was immediately re-built. The theatre hosted the famous Marx Brothers in 1916 and Sandra Bernhardt. Attractions like the Paramount Theatre made their debut just before the Great Depression hit. After WWI Kankakee County looked forward to the postwar era and found itself in an era of expansion. The construction of schools, business, and residential areas once again thrived.

In 1948 the Kankakee River State Park opened to the public. 1948 also marked the start of the Kankakee Valley Symphony Orchestra and the Kankakee County Museum in Governor Small Park. 1953 marked the County's Centennial Celebration. In 1989, the Bourbonnais Township Park District took over title and ownership of the historic Perry Farm property. 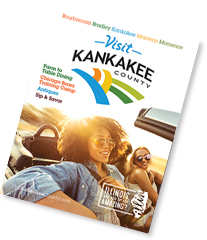